Is there a city that could or should have won an Oscar, if one was ever set for? Sure is. Because, as it seems, when History sat down to write the first page of Thessaloniki’s screenplay, in its head it was also writing the city’s Oscar acceptance speech. And this kind of storytelling is not at all far-fetched; after all, according to many chroniclers’ opinion, the history of the city can be seen as one long theatrical play. Or fiction. Not only Thessaloniki’s multi –layered history is marked by periodic discontinuities that have altered the city’s physiognomy, but when the whole 23 centuries of its existence taken into account here there is a city unique not just in Europe, but in the entire history of humanity.

Devastating fires, plagues and famines, janissaries, refugees and the cruelty of population exchange, bloodbaths, religious controversies, Balkan cabaret music and a myriad secrets and malfeasance. For centuries a multi – confessional patchwork, a city of three faiths, three races, never fused into each other; co – existing cultures, seldom mixed, speaking their own languages and honoring their customs.

A Syncretic city that all wanted for themselves.

A polyglot city that it is in itself a micro – history that contains so many of the big human themes; hence, more than a city: a movement of people and ideas. A “hybrid spirit” of Byzantine, Jewish, Ottoman and Greek nerve endings and neurotransmitters Thessaloniki is a perfect bread for any observer’s or historian’s gluttony.

Hellenistic in origin, Thessaloniki derives its original name of ...“Thessaloniki”, wife of king Kassandros (honor of his wife was the reason for the city’s existence), daughter of Philip II of Macedonia, also half-sister of Alexander, has catered the reluctant host to quite few empires.

Once Byzantine, the enfant gâté of the Byzantine emperors who endowed their chosen as the co-reigning city of the Byzantine Empire alongside Constantinople with overwhelming, work of art, churches, “in 1430 it was taken by the Ottoman Turks, became a famous outpost of Islam on the edge of Europe and the churches started blooming minarets creating a Constantinople – like skyline and highlighting the city’s orientalism, until 1492, when the influx of Sephardic Jews expelled by Ferdinand and Isabella enriched and formed a majority of its population”, as Mark Mazower notes in his famous book. In 1912 the Muslims expelled by the Greeks who returned in force, and in 1944 virtually all the Jews become carnage to the WWII’s brutal ideology.

As it goes, Thessaloniki seems always to have been suspending between the past and the present, between north and south, or Europe and the Middle East, and this is exactly the reason of its magic charm providing all the marvelously needed allegorical material for a 21st-century chronicler.

But do not be fooled: standing there battered by the centuries, it does not resemble an aristocrat fallen on hard times; on the contrary, persuasively shows how a city can have a soul ripe for exploration. Today with the multi – Culti being the norm, Salonica, as most in Greece love to call it, is a fast-growing modern commercial metropolis. Almost archetypically Greek, full of Greek 20th – century architecture and for that, the second city, the country’s co – capital may not be the most beautiful, but it is surely the hippest. With a charming sadness still around, in a way it could easily compared with its 8th century self, a chaotic city, but a "chaos of vitality" nevertheless, as Mark Mazower notes in his book Salonica, City of Ghosts. Vitality, that is also the fruitful product of its student-strong population of 150,000, an under-30s do-it-yourself youth culture-creative movement seen nowhere else in the Southern part of Europe. Vitality and rush; but if you think that everyone in Thessaloniki is rushing somewhere all day, just wait until nightfall, when everyone, in a town festooned with bars and clubs to serve a population twice its size, tops at a favorite cafe or out to dinner - this, before or after taking in a play or concert at one of the city's theaters, concert halls, nightclubs and bars.

With a population of nearly 800.000 making it the fifth largest and most populated city in the Balkans and the second most populated city that is not a capital, after Istanbul, Thessaloniki is Greece's second major economic, industrial, commercial and political centre, and a major transportation hub for the rest of south-eastern Europe. 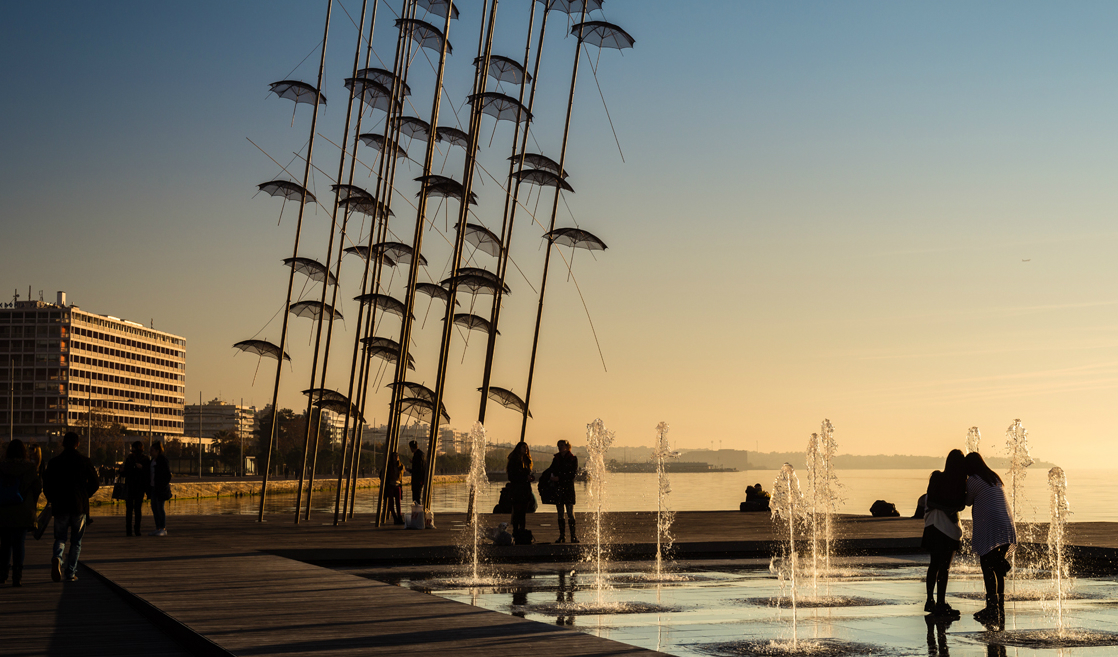 The today’s city, festivals abound (most notably the “Dimitria Festival” coming from the” Golden Age” of the Byzantine period), high hostess of the annual Thessaloniki International Trade Fair, of the International Film Festival and of the famed nightlife to say the least, is to be loved unconditionally; and it is. Because, the widely considered as the cultural capital of Greece, loving mother of many of the country’s most acclaimed bands, visual artists and designers as well as new waves of culture makers, manages to somehow conjure its most nostalgic self as an opulent bourgeois European provincial center, heavenly stranded between cultures and eras, masterfully balancing its hidden histories and secret wounds; with its Paleochristian monuments, constituting a Unesco World Heritage Site and with its open – air Byzantine museum allure; with the ancient city of Vergina reflecting the wealth, grandeur and glory of the Macedonian Kingdom within less than 2 hours’ drive and the charming peninsula of Halkidiki, famous for its wonderful beaches, tiny islands, small bays and Mount Athos; with its Old, Upper City which conceals some of the city's greatest historical attractions oozing profusion of smells and sights unchanged in centuries, where the fabulous Bezesteni stands inside the central market; with its trademark, the White Tower; the fashionable hangouts of Ladadika, with the Nikis avenue and Plateia Aristotelous with the innumerable, interchangeable café-bars and their sleek clientele sucking up the breeze of the mighty Thermaikos bay.

What’s not to love in the world's fifth-best party city worldwide? You are here, in the middle of a great juxtaposition of stillness and excitement; the all-too-typical contrast of Thessaloniki, that of past and present, that of tristesse and ferocity, a place where genuineness and coolness not only is abundant but also rewarded for being precious.

As precious are its cuisine and palate pleasures. True, true; nowhere else in Greece can one find so many different flavours combined on the same table. And if anyone is to acquire even the slightest idea about the local history, they have to get to know its flavours and bouquets. Thessaloniki is famous for its traditional cuisine, especially fish and seafood, cooked in manners that betray the origin of their various influences. With various religions and customs having added to or subtracted from its ancient gastronomic features, but retaining its traditional Greek profile, the city is nothing but a crossroads of flavours, a metropolis of tastes, a gastronomic capital. A city of pleasure, which, with the warm, the big heart, as its official campaign goes, has this drawing power: like the great Kavafis’ poem for his native grounds, you can never get rid of her. She will follow you; she will haunt you and pull you back. Because, undoubtedly, to get an Oscar, should there was such a prize, would be an incredible moment in the city’s course, but Salonica was not made for Oscars, it was made for the audience.